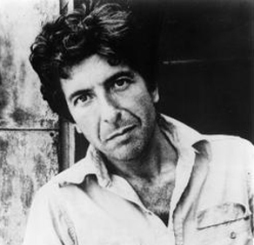 What can be said about Leonard Cohen? Well, the first thing we can say is that he is funny. Yes, funny. He’s not the “Patron Saint of Suicides” or “Mr. Misery” or any of the other epithets that have been lazily applied to him over the years by people who haven’t taken the time to listen to him. For example:

“So you can stick your little pins in that voodoo doll
I’m very sorry, baby, doesn’t look like me at all”

Any writers looking for witty, caustic one-liners would do well to read up on their Cohen.

In previous songwriter’s posts, I talked about Springsteen and Dylan, and how their lyrics are often less simple rhyming couplets and more like short stories. The same is true of Cohen. Songs like “Famous Blue Raincoat”, “Sisters of Mercy” and “Hey, That’s No Way to Say Goodbye” read like compressed short stories, with a sense of place, time and characterisation. If anything, he’s a little more obscure than Springsteen or Dylan. The stories are always told in the first-person by an unnamed narrator, who could often be called an unreliable narrator.

And he knows how to capture a sense of a moment in time. For years, I was convinced that Cohen had written an actual song about two people trapped in a hot room arguing. When I went to look for it, I couldn’t find it. That’s because he never did. He wrote many songs about couples, about couples arguing or falling out of love, and his descriptions brought to life such vivid images for me that I thought he’d actually written those images himself.

Leonard Cohen is an expert on relationships, whether in the throes of first flush or in the depths of breaking up. I don’t know if he actually went through all of these experiences but with lyrics like this, it doesn’t matter:

“I showed my heart to the doctor. He said I’d just have to quit
Then he wrote himself a prescription, your name was mentioned in it”

Lou Reed read out the latter quote when he inducted Leonard Cohen into The Rock and Roll Hall of Fame. After reading it, Reed threw his arms in the air and said, “He could have stopped there!” I’m inclined to agree. Although I’m glad he didn’t.

I’ll finish with one of my favourite Leonard Cohen quotes, taken from “Tower of Song”, his rumination on – amongst other things – what it means to be a songwriter (or as he so beautifully puts it, “paying my rent every day in the Tower of Song”):

“I bid you farewell, I don’t know when I’ll be back
They’re moving us tomorrow to that tower down the track
But you’ll be hearing from me, baby, long after I’m gone
I’ll be speaking to you sweetly from a window in the Tower of Song”

If you enjoyed this post, you can subscribe to the blog by entering your email address in the box on the left hand sidebar. Thanks!

9 thoughts on “What Can Writers Learn From Songwriters: Leonard Cohen”